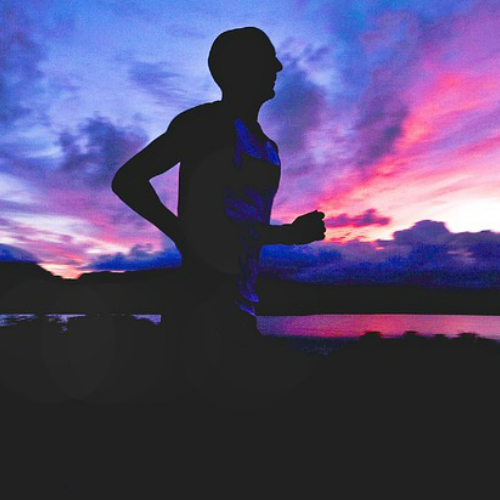 I grew up a competitive swimmer. I started at the age of 5 and swam competitively for 17 years all the way through college. Being a swimmer, I became very self aware of my body. I had a lot of bodywork done. I knew of my strengths, weaknesses, and asymmetries.

Even though I worked hard, I always felt like I was capable of more but I didn’t know how to get there.

It was definitely an area that I could have improved, but I’m not going to mention it in this article because I feel like the other issues would have made a bigger difference in my peak performance and there’s tons of information about nutrition.

Back in December of 2018, I was diagnosed with severe sleep apnea. A 3D scan of my face and airway revealed that my airway was about 1/3 of the size it should be. This did not happen because of obesity or old age, but a different more common factor that I had had all my life… an underdeveloped jaw.

According to Richard Klein, Stanford paleontologist, our jaws, both upper and lower, don’t develop to the same size that they had previously and are still shrinking. However, even though our jaws don’t develop fully, it does not mean that our muscles, especially the tongue, develop proportionately smaller.

A full sized tongue has to go somewhere if there isn’t enough space for it in the mouth so it encroaches into the airway. That makes the space for the air to go through the airway smaller. This is a surprisingly a very common problem and is why my airway is 1/3 of the size it should be.

During the day, the problem is not as bad, but at night is when things go really bad. During my sleep test, I stop breathing dropping my oxygen levels dangerously low many times per hour.

What I’m seeing in my office are many signs of underdeveloped jaws including braces, crammed or crowded teeth, tongue scalloping (indentations of teeth on the sides of the tongue), narrow and hight palates, tongue ties, grinding teeth at night, and more. The more we’ve scanned people with home sleep test, the more we’ve found this to be a major problem.

We see kids, including my daughter, who are not getting proper sleep due to their airway and when corrected, are much better able to focus and behave better. We’ve even heard of and successfully helped a few kids with bedwetting issues almost instantly once their sleep disorders were corrected.

So, why should any athlete care about this?

For one, hopefully I don’t have to explain the importance of oxygen in athletic performance. Mathematically a tube that is 1/3 of the size that it should be does not have 1/3 of the oxygen going through it than a full sized tube. It has much less than that. Any athlete wanting peak performance wants to be getting as much oxygen as possible into their lungs. Imagine trying to get all your oxygen through a straw. Your performance would suffer dramatically. Especially the more you increased your effort.

Second, is a less obvious reason. When the airway is compromised it leads to poor sleep where one does not hit the right stages of sleep often enough. I, and many of my patients, through they were really good sleepers before doing the home sleep study.

On the home sleep tests we do at our office, people with obstructive sleep apnea or sleep disordered breathing don’t hit REM and deep sleep as much as they should. These are people who don’t wake up feeling well rested and are tired throughout the day.

It is in the deep sleep state that the body releases growth hormone. Growth hormone is important for post workout recovery, maintaining muscle mass, and even breaking down fat for weight loss. Athletes concerned with peak performance should be interested in getting as much of their own growth hormone released as possible.

On the flip side, not breathing at night is stressful on the body and can trigger the release of cortisol, a stress hormone that causes weight gain and have the opposite effect of what any athlete would like to achieve.

So what can be done about this?

The standard of care is a CPAP machine. These machines can be wonderful in keeping a person breathing at night…if the person wears it. The problem is that they are uncomfortable, have low compliance rates, and once you’re on it, you’re supposed to be on it for the rest of your life.

So what does it do? Well, it does several things, but the most powerful thing it does is trigger stem cells found in the sutures of the palate to start laying down bone in response to a light stretch. This is through a process called mechanotransduction. 3D scans have shown that palates grow and widen to make space for the tongue.

More importantly, as the palate remodels, so does the airway. Once the airway has been remodeled, it is less likely one will need to use a dental appliance at night or even a CPAP if the obstructive sleep apnea has been resolved.

The dental appliance technology is through a company called Vivos Therapeutics (www.vivoslife.com). I recommend seeing if you can find a dentist near you trained with this system if you have an interest in being evaluated for an airway problem.

Another option would be an ALF appliance. You could do a search for an ALF practitioner near you.

When I was an athlete in my prime, I always wanted to know what I could really do if I achieved my full potential. This is something I wish I had known about because more oxygen, better sleep, and more of my own endogenous growth hormone would have surely allowed me to get closer to reaching my full potential.

In Part II, you’re going to discover the next thing I wish I knew about that could have allowed me to take me to another level with peak performance.

Stem Cells in the Cranial Sutures and More: In Support of Cranial Osteopathy

Stem Cells in the Cranial Sutures and More: In Support of Cranial Osteopathy