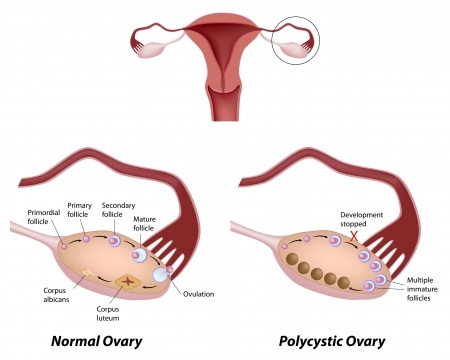 Guest Post By Nicole Jardim, Founder Of The Healthy Elements

You may have heard of Polycystic Ovarian Syndrome (PCOS) but do you know that it is the leading cause of infertility in the United States. It is estimated to affect 1 out of every 10 women in their childbearing years – that is 10% of us ladies! Despite its prevalence though, there still remains an ongoing debate regarding its cause, and why it appears to be on the rise in Western societies.

As has become the norm in the medical industry, a focus on cause and prevention has taken a backseat to treating the symptoms of this condition through medication, which has led to the widespread misconception that PCOS is an unpreventable incurable disease. I’d like to lay out the facts about PCOS and dispel the myths that have led many women diagnosed with this condition to feel helpless in their abilities to take control of their own recovery and hopeless in their dreams of one day having children. PCOS is not only treatable, it is preventable, and it is undeniably curable.

PCOS is a condition where a woman’s hormones are out of balance causing symptoms like irregular menstrual cycles, head hair loss, body hair growth (especially on the face), mild to severe acne, and depression. But to get to the heart of what’s happening in our bodies that leads to PCOS we need to start with insulin.

Insulin is released into our bodies in response to sugar in the bloodstream. Its purpose is to grab this sugar from our blood and get it into our cells so that it can be burned for energy or stored as fat. Now, when we’re eating healthy complex carbohydrates, these break down gradually keeping our insulin and sugar levels balanced with only slight increases after meals. But when we eat unhealthy refined, or simple sugars (think cake and cookies, white bread, white rice) these break down much more quickly causing a dramatic spike in our insulin levels. Remember, the purpose of insulin is to escort sugar from our blood to our cells, so this huge spike that occurs when we eat refined sugars causes more sugar to get pulled out of the blood a lot faster than normal. This in turn causes a drop in our blood sugar levels which then leads us to crave more sugary sweets to bring our blood sugar levels back up. And around and around we go.

Eventually, if we continue with this vicious cycle, our bodies will build up an insulin resistance. What this basically means is that the insulin in our system is no longer doing what it used to do (escorting sugar out of the bloodstream to our cells). But our bodies don’t know this so the pancreas continues to release more insulin into our blood to bring down the sugar levels, which eventually leads to high levels of both sugar, and insulin in our blood. What does all of this have to do with PCOS you might be asking? Well here’s your answer…

Insulin has a direct effect on two very important hormones in a woman’s body, follicle-stimulating hormone (FSH) and luteinizing hormone (LH). Both of these have an integral effect on the production of estrogen and progesterone during a woman’s menstrual cycle making their jobs two of the most important when it comes to regulating the female reproductive system. FSH is released early on in the menstrual cycle to help with the growth of the follicles (eggs are in the follicles) in the ovaries. One egg becomes the “dominant egg” and LH is released to help with the further growth of the egg which eventually gets released from it’s follicle in the ovary.  The remaining follicle stimulates the production of progesterone in the system. Now, a high insulin level has the effect of altering this very precise balance of FSH and LH. Too much insulin causes the pituitary gland to release more LH in proportion to FSH. Too little FSH means that the follicles cannot mature adequately which means the dominant egg is never formed. Instead, all that is produced is many unmatured follicles, which end up becoming cysts on the ovaries. And that is what is called Polycystic Ovarian Syndrome.

So now that we’ve got a picture of what is happening in our bodies that leads to PCOS, let’s talk about the treatments that are available for those who have been diagnosed with this condition. If you were to look at what the medical industry and government sources have to say about PCOS, you would think it was an unavoidable incurable genetically contracted disease. But if you look closely at the claims they make to support this, you’ll see that the scientific evidence suggesting that genetics play the predominant role in PCOS is laughable.

This is what a government health organization says in regards to the cause of PCOS:

“The cause of PCOS is unknown. But most experts think that several factors, including genetics, could play a role. Women with PCOS are more likely to have a mother or sister with PCOS.”

Hmmmm, interesting logic. The thing is, families share a lot more than just genes. They share an environment, usually a similar active or inactive lifestyle, and certainly, and most importantly, they share a diet. To conclude that genetics is the main cause of PCOS simply because family members are more likely to have it ignores all of these other things that families share and completely misses the root cause of the issue. This poorly thought out unscientific hypothesis about genetics has led to a widespread misunderstanding about the cause of PCOS which has had drastic consequences for many women affected by this disorder.

When a woman hears that she has been diagnosed with an incurable disease that was handed down to her, her options for treatment immediately become limited. She feels that, if her disease was out of her control, then so must be her recovery. The only option is to place her future in the hands of her doctor and the pharmaceuticals he prescribes and hope for the best. And we all know how well that usually works! In a condition like PCOS where the patient’s lifestyle and diet are such a huge component of the cause and subsequent cure, not including these in the treatment is completely irresponsible on the part of our healthcare practitioners.

And that is where we come in!  We’ve created a program specifically designed for women with hormonal imbalances that cause conditions like PCOS. It’s called Fix Your Period and you need to check it out! This 8-week program will guide you step-by-step so that you can begin your journey to heal physically, mentally and emotionally. If you have any questions, feel free to reach out to us at info@thehealthyelements.com or visit www.thehealthyelements.com and subscribe to our newsletter.

Nicole is a Women’s Health Coach and founder of The Healthy Elements [www.thehealthyelements.com], a business dedicated to helping women reclaim their hormonal health and feminine vitality naturally. She is the creator of Fix Your Period, a series of programs that empower women to heal their menstrual conditions in a fun and sassy way. She studied at the Institute for Integrative Nutrition and continued her training with Dr. Sara Gottfried and Jessica Drummond, two renowned hormonal health experts. Nicole passionately believes that all women should be active participants in their reproductive health and she is dedicated to spreading this message. Nicole also co-hosts a radio show called The PeriodParty  and you can find her on Facebook  and Twitter.

Osteopathic Manipulative Medicine Vs Prescription Medications: What Your Doctor May Not Tell You

Osteopathic Manipulative Medicine Vs Prescription Medications: What Your Doctor May Not Tell You